The Philips Hf3485 Wake-Up Light Plus is yet another high-quality model from this manufacturer’s range that really will provide you with everything you want and need in a sunlight alarm clock. 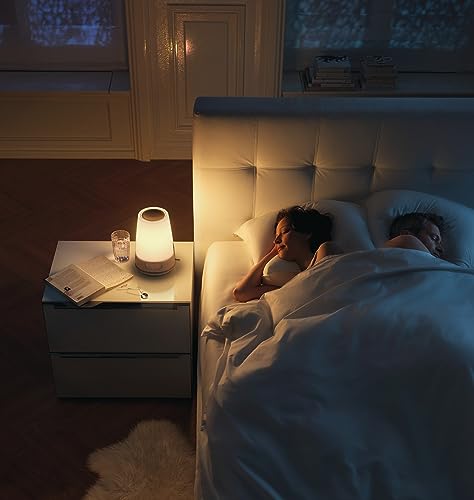 It is pretty similar to the Philips Hf3470/60 Wake-Up Light in the way it looks and operates but two things set it apart from the more expensive price and the extra features that make it even more personalized than other models are.

For example, it does have more sounds for you to wake up to as well as a USB connection so that you can download some of your favorite songs and wake up to the tunes that you would rather hear first thing in a morning.

Pair this with 20 light settings and you have a natural light clock that offers you exactly what you want and need to relax. It also has a sunset option so that you can go to sleep with diminishing light and sound. This makes drifting off to sleep enjoyable.

Despite the similarities with other Philips wake up lights, it should be noted that there are different positives mentioned in various reviews, including the following:

Despite the fact that the Philips Hf3485 Wake-Up Light Plus does not advertise itself as being able to combat the symptoms of SAD, some people that have used it report that it does indeed help to alleviate the blues, which would suggest that it does more than Philips say it does.

The light is incredibly warm and will give you a sense of well being that very few similar options can give you. According to one review, it is the best light she has ever used in this way

It will slowly increase the volume of the sound over the course of 90 seconds so that you do not get too harsh an impact when you wake and thus ruin the effect of the light.

In addition to these pros, Philips Hf3485 Wake-Up Light Plus has the same clinical backing that the previous model does and so has been proven to work.

However, there are still cons evident in the reviews, even if most of them do seem to be an issue as a direct result of the high and somewhat realistic expectations of consumers.

For example, one person complains that it does not have a battery backup in case the electricity goes off. Despite the fact that it offers so much else, this is a sticking point that seems a little petty.

In addition, some complaint about where the buttons are because they are not immediately obvious. However, they are easy to use them once you have found them.

Also, another complaint is that you cannot use sunset and sunrise modes, or dusk and dawn simulation as they are called, in the same night without waking up to reset it. This is a common complaint about those using the wake-up lights because the vast majority that has both options also have this problem. As such, this light alarm should not be judged on this stumbling block alone.

Overall, the Philips Hf3485 Wake-Up Light Plus offers excellent value for money and is worth trying out.

What exactly does the Philips hf3485 wake-up light do to help us get up early in the day? It simulates how nature used to wake us up before the discovery of alarm clocks — making use of sunlight as a cue. Our own bodies clock uses outside light as the source of timing information with the aid of the light-sensitive cells within our eyes. Throughout dawn, the light intensity rises gradually, giving the body a cue that it is wake up time.